Today is the first day we are all working from home. I had three days last week to get used to Simon being at home. God he was a grumpy bastard, now I’ve got a 10 year old and moody 14 year old to “home school” as well.

The morning passed with me being the resident IT desk support worker. Trying to get power point set up on 10 year old’s computer, getting her an email address – of which she is proud of.   Weird kid

By about lunchtime I managed to get 10yo onto MS Office and she was good to go. The teen seemed to think that he’d done all his work in about half an hour.  I need to check on what he’s doing but at some point my own “paid” employ may notice I actually haven’t managed to do any work all morning.

Finally got some work done this afternoon although at present I know I’m not working at full capacity. I’ve ordered a 2nd computer screen which I’m sure will help make life easier.

8.30 tonight the country was addressed by the Prime Minister.  I always wondered what it felt like, all sitting in the front room listening to an important announcement by your leader, like the images of families around the wireless when the start of WWII was announced.

We are now officially on lock-down. Only going out for essentials, food and medical needs.  On reflection, personally for me this is a time to be able to press re-set.  It will certainly help cut down on my latte consumption. I may be the only person who comes out of this mess financially better off.

Book Review - All I Ever Wanted by Lucy Dillon

Nancy is four, nearly five. She talks all the time: in the car, on the way to nursery, to her brother, to her collection of bears. And then one day everything changes. Nancy's mum and dad split up, her father moves across the country, and Nancy stops talking.Eva is forty-four, nearly forty-five. She always knew marrying a much older man meant compromises, but she was sure it was worth it – until Mickey dies suddenly, leaving Eva with only his diaries and a voice in the back of her mind telling her that perhaps she's sacrificed more than she meant to.

The family are trying to negotiate their way around the parents breaking up and having to invade on Aunty Eva for Patrick's bi-weekend visits.  Nancy has stopped talking and can only manage the odd whisper in a safe place whilst Joel is desperate for attention.

From the moment I saw the cover and read the description I knew I wanted to read this book.  I wasn't disappointed.  As soon as I started I was hooked on the characters, 10 year old Joel who can't sit still and has a penchant for musicals, chatterbox 4 year old Nancy and her parents; kooky Caitlin and up tight Patrick. Throw in Eva, Patrick's widowed sister and two adorable pugs Bumble and Bee and you have the recipe for a heart breaking but uplifting story.

The story sensitively deals with a number of issues including selective mutism, bereavement and divorce.  It gently guides the family through the situations with the reader developing a real ache to want to reach out and help.  To be honest by the end of the book I was an emotional wreck.

If you want a book to snuggle onto the sofa with whilst hibernating from the cold, then choose this one, you wont regret it.  Just don't forget to have the tissues ready! 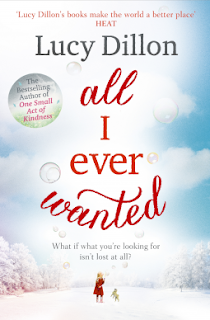 I was kindly provided a free copy from Hodder & Stoughten via Netgalley. All opinions are my own.

Book Review: The Easy Way Out by Steven Amsterdam

Evan is a nurse, he is also an assistant.  He works for a sponsored Euthanasia project assisting the terminally ill to achieve an end they feel comfortable with.  Evan doesn't tell his friends and lovers what he does, and his Mother; who has a degenerative disease seems more than comfortable with his job and his role in her future.  As time goes by Evan finds the lines blurred and considers his situation. Who has the choice to live or die?

The main character; Evan, has few friends and this is explained by way of his upbringing with his Mother and their seemingly chaotic life.  At times he seems detached and others too involved. He has a relationship with two men which he can't fully commit to. He comes across as a man who struggles with emotions.

Although not what I would term a page turner, it's interesting and thought provoking. This book covers a highly sensitive subject remarkably well  and I believe would help give an understanding of the thoughts and processes of both the patient and the assistant to the reader .

Whatever your thoughts on it, Steven Amsterdam has managed to broach the subject with a beautifully careful understanding and an insight into the world of Assisted Suicide through his own work as a palliative care nurse.

This book was provided free of charge by Riverrun & Netgalley. All thoughts and opinions are my own. 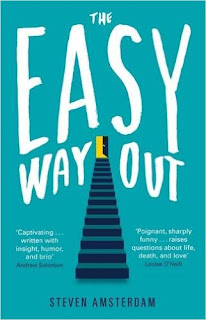 Posted by OldPoyntz at 18:17 No comments:
Email ThisBlogThis!Share to TwitterShare to FacebookShare to Pinterest
Labels: Books, Euthanasia, Fiction, Reading, Review

It's been "revealed" the age at which parents stop reading to their children is:   11

I have one of them and I've stopped reading to him.  I love books, I love reading and getting lost in a story with characters I care about and want to join on whatever part of their journey.  But I don't want to do it reading out loud to someone who's not really that interested, wishing they were playing on their X-box or watching YouTube and keeps asking me inane questions to waste time.

By the time the 11 year old is going to bed it's 9pm. I'm tired and have usually lost patience and the will to live by then.  I've been up since 6am, made packed lunches, done one school run, commuted on trains to work and back and done an 8 hour stint in the office. Meals are made and questions are raised about the homework that should or shouldn't be done.  I've argued with both children about showers and hair washing and wrangled the 6 year old into bed bemoaning the fact the 11 year old has a later bedtime.

Do you still read to your 11 year old?
Posted by OldPoyntz at 13:37 No comments:
Email ThisBlogThis!Share to TwitterShare to FacebookShare to Pinterest
Labels: Family, General, Kids, Reading

All Aboard The Gaming Bus

I never in a million years expected to find myself at a gaming event, yet that is what happened this weekend.  The 11 year old and I went off to Alexandra Palace in North London and spent a whole day at Legends of Gaming 2016.

I'm not a gamer in any shape or form.  Apart from my recent interest in Pokemon Go. The 11 year old is. From the age of 5 he loved his DS, playing Mario Kart and mini games. He moved onto the Wii where Mr.M and the boy played Mario Kart tournaments, they ski-ed, played tennis, darts, danced and beat up Bowser.  Then 11 year old begged for an X-box.  That was the game changer for him and us. Gone were the family fun games and in came games where he wanted to be on a headset to his friends and shoot people.

So when I saw an advert for Legends Of Gaming, I thought to myself. Aha, I know a young man who might enjoy this event and promptly booked general day tickets for £15 each.

When we arrived the queue was huge although moving quite quickly. Luckily we spotted 11 year old's friend with his Dad and we nipped in with them.
As soon as we got in, the boys wanted to be off and running everywhere, looking at everything. Within half an hour one of the 11 year old's favourite You Tubers, Ali-A. was taking part in a tournament. The boys took their place in front of the main stage whilst the Dad and I waited off to one side. 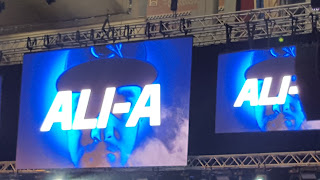 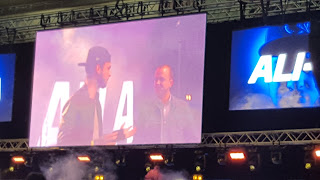 The boys were off the scale excited. Ali-A was competing in a Minecraft tournament against Dan-TDM. Neither of them play Minecraft much anymore but to actually see their favourites in "real life" was the equivalent of me seeing Gary Barlow.

The event obviously had lots of stalls from many, many gaming companies, There were banks of screens all over the place for kids (and many adults) to try out new and old games. There was the gaming bus and the gaming van. (available for parties).
By 3pm the Dad and I were shattered, in need of tea and a sit down. We managed to find a quiet corner, where we could re-charge our batteries. (not literally.)

The boys had walked, played, bought expensive Japanese & American candy and overall had a great day. By 4pm we managed to get them out the door.  They had a great time and really enjoyed it.

If you have a young gamer, I'd certainly recommend this event for 2017. 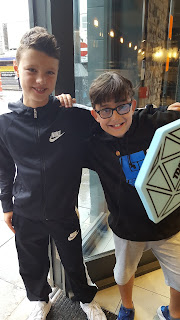